New foliage, at this time of year...


I've been worrying about this Leucothoe fontanesiana, throwing up this beautiful new foliage at such an iffy time of year (this picture's from the week after Thanksgiving) . The cultivar is 'Scarletta,' but this is the first year I've seen this dramatic color in the new leaves. Laurie bought this plant for its graceful, drooping shape and glossy evergreen leaves. When I told her I thought it would cook in her west-facing front boxes, she gave it to me (thank you, Laurie). I was right that it hates hot afternoons; when our mighty oak came down, I had to move it to a shadier, morning-sun spot. It's spreading and trailing slightly over our stone wall. And the foliage is holding up to the beginnings of wintry weather... so far. 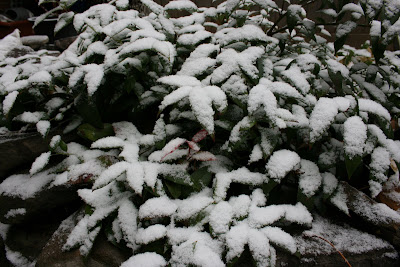 Mary's wondering what to do with her Black Eyed Susans:

I love the seed heads, like black q-tips as I look out onto the garden through the winter...must I remove these, 'cuz I sure don't want to. Since I don't remove, is this making for less than FABULOUS flowers? I also think they just need to be thinnned by ripping out some here and there and planting down the street in a wasteland? Yes?

Deadheading during the bloom season may make the plant bloom (even) longer. Cutting off the last of the flowers before seeds form may make it more vigorous next year - it takes plant energy to make seeds. But at this point, they're dormant.

Reasons you might want to remove them: to stop them from seeding in all over the place; for neatness; to do some work now that you don't feel like doing in spring. But you don't want to - for the reason that you want to look at them (this is an even better reason than "don't feel like it," and that's legimate, too).

You can rip some out and throw them in your wasteland down the street - we call that dividing, and it will make your planting more vigorous. Spring or fall would be best, but as you may recall, I took my black-eyed-susans out of your garden in July and left them in my hot car before planting them. They still bloomed till Thanksgiving that same year.

In nature, the only seedhead removal that happens is whatever the birds eat, plus whatever dries up and blows away between now and spring. I hope this makes you feel better about doing nothing - often a fine choice.

p.s. I think it's fine to post questions in comments. I'm pulling them into a new post to answer, for folks who don't read down to the last drop in the land of comments.
Posted by SaraGardens at Thursday, December 06, 2007 6 comments:

What could be more wonderful than an email entitled ‘Propagation question’? Mary asks,

Can we propagate Jack-in-the-Pulpit with the red seeds we have? John is most curious, I'm just hoping for more through some method not involving human intervention.

The answer is: Yes, you can, and be careful with those red berries (the white seeds are inside). Like many fruits, they contain an enzyme to inhibit germination (no point germinating inside the fruit, or inside of an animal or bird who eats the fruit - plants are clever). But Arisaema berries also contain calcium oxalate crystals, which really burn. So wear latex or rubber gloves to clean the seed from the pulp. You can sow outside now or in spring. You'd probably get a lower germination rate than you would if you sow indoors with coddling, but I assume coddling is the sort of human intervention you want to avoid. If you're sowing indoors, soaking them for a day or two might speed germination. 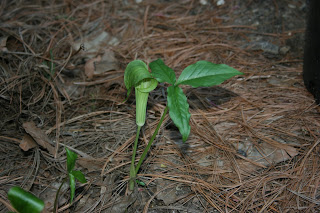 They are slow from seed - the first year you get one leaf (and not the typical leaf). The second year, expect typical foliage, but no bloom. If all goes well, you'll have flowers the next year, but probably no berries (male flowers only). But they will get there. You can also divide them - your patch is pretty established. Divide in fall rather than disturb 'em in spring. I divided by accident, when I dumped out a pot I thought had nothing in it, and found the dormant corm and its little offsets.

The Connecticut Botanical Society has beautiful photos, including one showing off the berries.

This would have been a good occasion to learn how to use my camera's timer. But no time! We were off to our fabulous lunch date. Truth is, we go out to dinner pretty often, on our own and socially. Super-premium lunch dates... how often do those come along? We thought of it spontaneously (and simultaneously) this morning, and of course we went to our old friend, the Union Square Cafe. And there we ate some of our favorite things on the menu, and some new wonderful things on the menu, and it was glorious.

The romantic lunch date is just one gem I've learned from Robert in 11 great years of marriage. The collected wisdom could fill a book (if I title it "How Not To Eat Like My Husband," it's a sure self-help bestseller). Back to garden and plant topics tomorrow... and remember, invite your beloved to an exceptionally wonderful lunch, soon.
Posted by SaraGardens at Monday, December 03, 2007 2 comments: