Have you ever thrown together a meal from back-of-refrigerator finds, forgotten pantry items, and whimsy, and had it turn out to be so wonderful that you wish you had written down the impromptu recipe, so you could do it again?  Or - have you looked at a recipe or two, and then done what you guessed was a better idea, and it turned out you were absolutely right - but you don't exactly remember that better idea?  I've done both of those - lots and lots of the second variety (which sounds a little like an inability to follow instructions - we're going to call that "not easily led," and make a virtue of it.  OK?).

As it turns out, the real purpose of the Internet isn't what we've been told.  Nor is the Internet made of cats (unless it is).  The Internet was created for knitting, and is now almost entirely held together by beautiful knitting.  (Sometimes tangled with cats - I'm sure you can find your own link illustrating this.)

I have barely dipped a toe into the miracle that is Ravelry - I hereby resolve that rectifying this shall be Resolution #1 of the end-of-garden-season resolutions (what, you don't make resolutions at the end of every gardening season?).  If you don't knit, or want to - you don't have to worry about that, but if you do - meet me on Ravelry.

The ingredients for this adventure were some bulky yarn I had on hand, and our Montauk vacation just when knitting season popped up, with no time to shop for the perfect project.  Seasoning (other than dog hair) was the thought - hey, it's almost Amy's birthday!

And inspiration, as so very often since I rediscovered yarn, comes from Knitty - I have obsessed over and tinkered with the amazing bounty of ideas and patterns and wisdom there, but never quite followed any pattern.  This is greatly because I am too ornery to follow patterns like to make things up as I go along.  (Once a crocheter told me that knitters don't do that, and crocheters do, I was pretty much doomed.)  And maybe because some things seem harder than I had in mind, or don't quite suit the yarn I have on hand.  In this case, I was in awe of Jeanie, but unsure whether I could pull it off (and certainly not in the bulky yarn in my suitcase)... and also not entirely over the Year of Short Rows - a knitting superpower I discovered in 2010 (I may need another resolution to move on - but short rows make knitting do non-flat, non-square things, and This Is Good).

The combination of cables, and dropped-stitch lace, and short-row shaping to make the whole thing curve had me really jazzed.  I looked at the short rows + cables miracle that is Caireen - but had set my sights on working the other, Jeanie-like direction (edge to edge, not top edge to bottom).  Oh, and I stopped doing the drop-stitch lace in the middle, so the cables cuddle together and keep the neck warm.  See how I always try to squeeze in one idea too many?

However, like Caireen, this is a scarf/shawl hybrid, and it came out much better than I deserve.  I know all sorts of things I'd do differently and better next time, if only I had done a better job writing down what I did this time.  Amy says she wears it all the time, and I say she deserves to be cozy and warm (and I wish I had a pic of her wearing it). 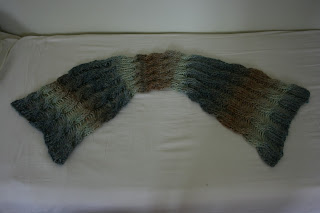 Dedicating 11.4.11 to my LYS (that's Local Yarn Store, you gardeners and other non-knitters), with a promise to shop there for the next experiment along these lines.
Posted by SaraGardens at Friday, November 04, 2011

I am rediscovering the joys of knitting, but I can't imagine working without a pattern!

Aminator, I sometimes 'make up' a pattern by using the basic structure of something a clever person has already figured out, and changing the stitch pattern, or making it bulkier or lacier, or... Maybe this urge will strike you one day - let me know!