This post is for this spring's Container Gardening class @NYBG - a special group with a fine idea about sharing gardening knowledge and resources, particularly in the NYC area (and especially in Manhattan).

Dear students, please feel free to use comments here to share resources you've found helpful.  Several of you have mentioned good sources for plants in smaller conversations, and I know others would love to hear.

(Kind non-student readers, you can throw a word in, too.)
Posted by SaraGardens at Monday, April 23, 2012 4 comments:

Shawn and I had a great garden visit, and he says so right here.  We talked about more plants than he had room to include - and I kept remembering moremore plants thereafter.  Shawn, come say hi to the Mayapples when you're here on Wednesday!  And I look forward to having you guys over for a serviceberry-fest come June.

p.s. this inspired me to get those ramps in the ground - finally! - looking forward to more next year.
Posted by SaraGardens at Monday, April 23, 2012 No comments:

Another sort of leap - I guest-blogged!

I know you're thinking - maybe I should blog around here a little more often.  Go on, admit it.  (Need I remind you of the first rule of Fight-Club-and-blog-posting, again?)

This dissertation on hand-knit swiffer-covers came out of a conversation I had with the divine Maxcine of Stitch Therapy about acrylic yarns.  I believe she is still shaking her head about it, and not exactly in 'wonder'...

While we're knitting (and no, Sara doesn't Garden so much in February - this is knittin'-season!), Catherine took this fab picture of me and my improvised hat-kerchief-headband pattern:


The first picture is a little closer to the beautiful yarn's real color (soft, dreamy) - plus, it looks as though a giant tree is flinging its branches out of my head, because it's such a sweet-petite sort of head covering.  Look, a botanical reference!

The Dragon Skin stitch pattern is from Barbara Walker's 2nd Treasury of Knitting Patterns - an encyclopedic sequel to her first compendium of stitch patterns.  I've been doing a sort of Julie-Julia thing, working my way through it.  This one's all about the Year of the Dragon, and I'm riffing on it in other ways, because it's so beautiful... and it's easier to see it in less fascinatingly dyed yarn.  Stay tuned for the mittens, more fish-like, and in the other color you thought I'd never be caught dead wearing or knitting. You may pretty-please guess in the comments, or just let me know - what newness and leaping are you up to?

In which I invoke the first rule of Fight Club

(That means, you sticklers for clarify and simplicity - we're not going to talk about blog posting.  Get it?)

Here's one thing I learned:  turns out that every time after the 2nd time is the charm.  That goes for starting and restarting things, and also:  Yarn-bombing the dog, chapter two, which led up to #3, which is even better!

Better yarn (wool, springy, feels great); it wears better, stretches less, and... I had some.  Also - what a clever idea to incorporate the ID tag from his old collar, huh?

It got filthy-icky-dirty the first morning he wore it, of course, and suddenly I couldn't remember why making this in the form of a knitted friendship bracelet was so important.  Also, as you can see, this sort of cable will curl, and not in a cute way.  And anyway, his old collar had a buckle, too - right?

So I cut the buckle from his old collar and started over, and luckily didn't put it on him the morning after I finished it, because that was the day the Terrible Thing happened in the dog park, gruesomely involving the neck in question.   He's been wearing it for a while now - and with all the interest in his neck, both of the knitting and medical variety, I'm pretty glad there will be no more finishing-in-place.  And you'll have to wait till he wakes up for the photo evidence of the 3x=charm version - this one's a reversible cable, making it thicker and - you know, better.**

I'm looking forward to trying this in another fiber for summer (hemp?).  And in another color, because this green has not been popular with the growing and increasingly passionate Friends of Bu claque.  You may vote for your choice of color for the next Collar Of Bucephalus in the comments.  That will be #4, and that will be the charm, too.

And here's the recipe, but first:  it is astounding how much easier it is to invent a pattern than it is to write one down.  And it's even easier to find one on the web: I owe a lot of generous knitters big-time for their help with patterns, ideas, inspiration, and technique.  Go on now - go kiss a knitter today.

**He wasn't sleeping!  He was keeping the sofa safe from vacuuming: 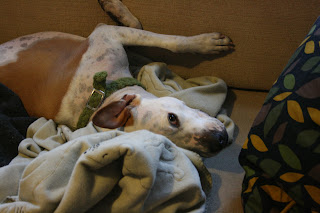 
you will need:
not very much yarn (mine's Karabella Aurora 8)
needles 1 size smaller than the yarn suggests
optional/recommended: a buckle (mine came from an old collar, via  http://www.boomerangtags.com/, and I highly recommend them)... or you can graft the beginning & end around your dog's neck (which I did, twice, and it looks great and is the ultimate friendship bracelet, but consider the possibility of dirt, and the convenience of taking the collar off to wash it & pooch separately).
optional: a tag – the best are from my pals at http://www.boomerangtags.com/

Based on the Aran Braid cable from Barbara Walker's 2nd Treasury; made reversible primarily to eliminate curl, and it also makes it beefier.

CO 16 provisionally, if you'd like to go back & graft the collar OR if you want to use the CO stitches onto the buckle's bar, which would be a fine plan... and if that's your plan, do a couple extra rows of plain rib, so the cable doesn't pull the stitches and make 'em hard to fiddle with.
You can also CO 16 your favorite way, and plan to go back and attach it to the buckle with a yarn needle.

Work a couple of rows in k1/p1 rib, just to get away from the buckle (or to make the provisional cast-on easier to deal with later).

If working in the tag... I don't love the way I did this. I recommend separating the K & P stitches on 2 needles, and rejoining (in proper alternating order) on the other side of the bar.  Keep going until approximately your dog's neck measurement.

If you plan to graft, I don't have to tell you not to make it too tight around the dog's neck. Don't make it too long/loose, either (heaven forbid you had to grab your dog by the collar in an emergency, and it slipped off)

If using the buckle, continue till about 2” longer than your dog's neck – longer if your dog is growing. (You'll want to test the stretchiness of the collar with a few tugs along the way; mine "grew" more than I expected, and I'll be adding a loop to keep the end flat soon.)  The pointy part of the buckle fits nicely through the middle of row #1 - no need to make a buttonhole.

To finish, you may either:

separate K & P stitches onto two needles and graft;
OR separate K&P sts onto 2 needls and do a 3-needle bind off;
OR just bind off in k1p1 rib so you can get this thing on your dog already.

You can (of course!) make this using a different cable stitch.  One nice thing about the Aran Braid is that the center cross in front somewhat undoes the natural tendency of the two back crosses to twist. Also – it's fancy-looking, yet easy to memorize, and easy to know what you last did (which tells you what to do next).