First annual Serviceberry Fesitval! (and What We Ate)

What I believe to be Brooklyn's first-ever Serviceberry Festival is a multi-day 'event.'  Sort of the opposite of a moveable feast, it all happens right here, with a rolling cast of characters.  We have a young neighbor, Felix (yes, another serviceberry-loving Felix!), who helped on his side of the fence with some serious harvesting and eating.  (I wish someone could lift me up into the branches I can't quite reach!)

Marielle comes this week - we'll co-invent a new version of Pink Drink, eat Something Serviceberry with her boys (at least one something!), and harvest some low-lying fruit.  I'll bring sorbet to the nursery, for our special-magic Thursday late evening hours.  And next week, Ellen and I will indulge in the serviceberry* wine, and perhaps put up next year's batch, if we have time between delicious nibbles and catching up on important things in the world of plants and Everything Else.


*Everyone in that paragraph will be saying Amelanchier for serviceberry - you're OK with that, right? 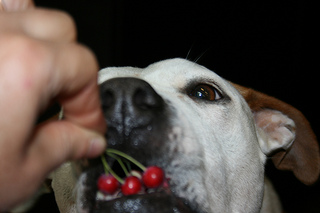 Bu got us off to a celebratory start.  Next year, please join us!  Promise I'll remember to invite you, and to plan a truly eventful event.  For now, just pencil in "berries" for JUNE.

Before the recipe - and I use that term loosely - here's the latest installment of 'what we ate': lunch today was ground turkey/duck liver burgers, seasoned with cumin, sumac, and garlic chives, plus carrots and the sole food I'm trying to eat less of, potato chips.

Breakfast was a pork cut I've never had before - sort of like a hangar steak... with plantains.

Last night's dinner was duck breast, sweet potato fries (on the stovetop, in duck fat, DO IT), with serviceberry sauce.  The sauce was heading toward becoming sorbet - this is a pre-freezing inspiration.  So far, it's a multi-purpose serviceberry substrate - and it would have a completely different character and deliciousness in a cooked version. Here it is raw:


4 C serviceberries
2 glugs maple syrup
shake in some sumac (mine was store-bought - bonus points if you foraged yours)
Look, three ingredients, from three trees!
Some water...add lemon juice, perhaps, if you lack sumac
(bonus points if you try this with infused sassafras twigs, with or instead of the sumac) 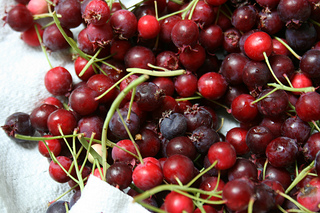 Blend, then add more water.  The berries seem very pectin-y, and much less watery than the strawberry version we made last week.  So... add more water!  I strained it to get the seeds out, though I regretted every drop of flavor lost to the sieve.  If I were planning to enjoy this alone, or in a cooked version, I wouldn't strain.

Before freezing in your sorbet-maker, serve some with duck...or make an almond granita and to enjoy with serviceberry sauce!

The sauce on the duck sounds crazy good! And the sorbet. I always love the sorbet.

Thank you for reminding me of what happened around here this week. Though I do think we need a service berry, balsamic, reduction.

Kizz, I'm taking the motherlode of sorbet to the nursery, but please demand a sneak preview! John, you silly-funny-friend... I hope your serviceberries/shadblow flower next year, if they didn't already.

Faith, hope, and love -
the greatest of these is love:
jump into faith...
and you'll see with love.
Doesn’t matter if you don’t believe
(what I write).
God believes in you.
God bless you.